Captivated by the tales of the Mabinogion – earliest prose stories of British literature – and re-enacting the tales while walking the stunning Powys landscape last week (Thursday, 3 May) made the day mystical and highly memorable.

“With four seasons in one day, we experienced a changing landscape throughout the day which seemed appropriate with the tales of the Mabinogion which draws upon the mystical word of the Celtic people intertwining myths, folklore, tradition and history,” says story teller Wayland Boulanger.

Teacher Caroline Phillips believes the day inspired the children and got them thinking about where the story might go. “They were so excited & interested to know what happened next as we walked on to another point of the hill.”

Many of the 26 children aged between 8-10 years live locally and pointed out their homes as we walked across Llanbedr hill near Painscastle.

The day started with one of the moorland managers explaining the work of the project to protect the rare ground nesting birds which are in serious decline.

With over 200 children out on the moor so far, the aims of the Powys Moorland Partnership (PMP) project is to restore the condition of the heather to encourage ground nesting birds back and help boost biodiversity. It is a three year project which ends next spring.

It’s a collaborative, landscape scale project engaging with local farmers and all stakeholders to make better links between our natural resources and the well-being of the people.

Catherine Hughes is the project facilitator for the PMP: “There’s nothing more powerful than getting children outside to see for themselves these magical landscapes grazed by sheep which are so important in providing us with so many benefits. With seventy percent of our drinking water coming from the uplands filtered by the vast amounts of mosses, and slows down the flows downstream, and also stores vast amounts of carbon. 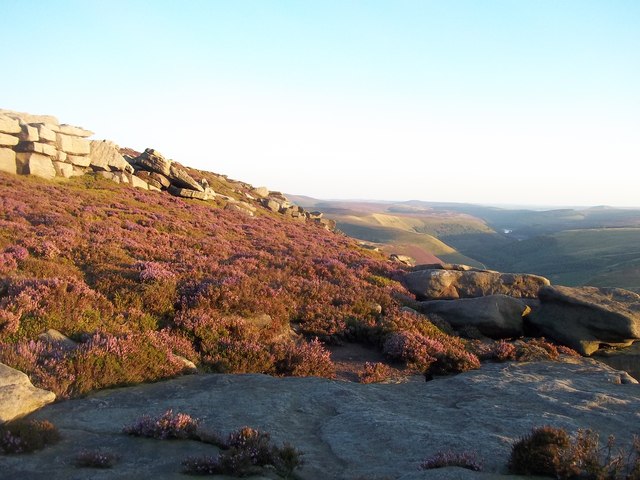 The Fieldsports magazine website recently ran a great insight into the work of a true moorland pioneer: Geoff Eyre.

Since taking on the sporting lease for Howden Moor in Derbyshire’s Peak District in the 1990s, Geoff has achieved spectacular results as he set about regenerating its habitat by applying careful management practice and innovative agronomist principles.

“An ESA (Environmentally Sensitive Areas) programme outlined the importance of heather cover in supporting a diverse number of species. Whilst some attempt was made to reverse heather loss, I asked if I could try a different approach.”

Geoff pioneered an ingenious use of smoke along with careful seed improvement, controlled burning, cutting and spraying. Consequently, thousands of acres of moorland have recovered, and his methods are now followed on moors across the north of England and Scotland.

This in turn has resulted in increased employment opportunities for keepers to look after the increasing acreages of productive heather areas.

There is a thriving birdlife at Howden, including a third of the Peak District’s ring ouzels. Big numbers of golden plover, curlew, lapwings and an increasing number of black game. In fact all typical moorland birds. And Geoff has given talks to birdwatching clubs. There is an increasing number of peregrines and merlins, and a high density of goshawks, and relative newcomers buzzards and ravens! “I had never seen a raven until 10 years ago – now we seem to have lots of them.”

And furthermore, thousands of walkers now have better-than-ever views of swathes of purple heather!

You can read a detailed scientific appraisal of the management of Howden Moor, including a downloadable PDF, on the Science Direct website.